Posted on September 6, 2012 by Administrator 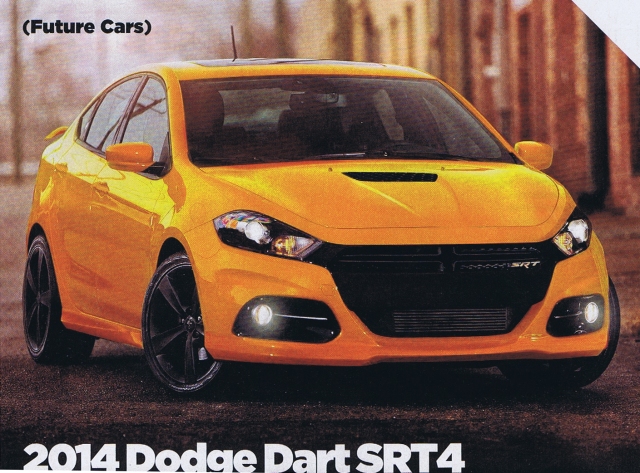 September 5, 2012 , Auburn Hills, Mich. – A change is in the air and it’s not just in the weather. Labor Day may mark the unofficial end of the summer, but it also signifies the beginning of fall, which means football, baseball pennant races, television season premieres and the start of a new multifaceted Dodge Dart advertising campaign.

The Dodge brand debuts a new television commercial for the groundbreaking all-new 2013 Dodge Dart as the marketing launch of its new compact car shifts into high gear beginning Wednesday, Sept. 5. The 30-second “How to Make the Most Hi-tech Car” spot reveals the steps taken to create the class-leading technology and features in the Dodge Dart, including an available 7-inch thin film transistor (TFT) customizable instrument cluster and 8.4-inch touchscreen Uconnect media center.

The spot will join the “How to Change Cars Forever” launch ad and run on network and cable programming, including professional and college football games, regular season and playoff baseball games, network television season premieres and hit shows, news programs, late-night entertainment shows and high-profile broadcast programs such as the “Latin Grammys” and “American Music Awards.” Additional television spots will be added later as the campaign continues to run throughout the remainder of the year.

“With August sales of more than 3,000 units and two consecutive months of nearly 300 percent increases, we are very pleased with how the Dodge Dart has been received in the marketplace,” said Reid Bigland, President and CEO – Dodge Brand, Chrysler Group LLC. “We have been steadily ramping up dealer inventories of the Dart throughout the summer, and the fall marketing campaign will make sure everyone knows about this world-class vehicle that offers segment-leading technology and benefits never before found in a compact car.”

The 90-second “How to Change Cars Forever” spot, which first debuted in July, will run Sept. 5 in the top 25 U.S. markets during the NBC network’s season opening NFL game. The long-form spot will run again over the weekend on the Fox network’s Major League Baseball game (9/8) and Sunday afternoon football games on CBS and Fox.

Since the Dodge brand first revealed its recipe for the all-new 2013 Dodge Dart this summer in the “How to Change Cars Forever” TV spot, momentum for its much anticipated entry into the highly competitive compact car segment has continued to build. As vehicles arrived in dealerships nationwide, 30- and 60-second versions of the TV spot aired on major broadcast and cable networks, and in movie theaters across the country. Dodge used high viewership programs, pop culture summer events and online communities to create awareness and interest in the Dart among key consumer groups, including young professionals who may be purchasing their first car and “boomers” who may be re-entering the compact car market looking for mid-size roominess with the affordability and price position of a compact car.

Daily average visits to the Dodge brand website, www.dodge.com, have increased by 30 percent since July. The number of consumers requesting additional information about the 2013 Dodge Dart, called “handraisers,” has increased significantly as well with California leading the states with the largest number of handraisers. Seventy-five percent of those requesting information on the Dodge Dart do not currently own a Chrysler Group vehicle.

‘How to Make the Most Hi-tech Car’ TV Ad

The 30-second commercial is the second installment in the new Dodge Dart marketing campaign, in which the unique process of creating a world-class car today is revealed. In this spot, the Dodge brand outlines, in a humorous way, the steps it took to develop the class-leading technology features of the Dart. These include building a time-machine, traveling forward in time to the year 3000, and bringing back a “Future Guy” who can build the compact car’s extra-large touchscreen and customizable digital dashboard display. He is then sent back to the future and the time machine is destroyed. Easy.

The spot can be viewed at http://www.youtube.com/dodge.

The print work supporting the 2013 Dodge Dart campaign showcases the design of the vehicle and features the “New Rules” tagline introduced in the first TV spot. The first two ads contain the headlines, “We Didn’t Tweak Last Year’s. We Invented this Year’s” and “Designed in Michigan. Built in Illinois. Driven in America.”

The TV spots and print ads were created by the Portland, Ore.-based advertising agency Wieden+Kennedy.

The all-new 2013 Dodge Dart leverages the world-class architecture and DNA of Alfa Romeo and then infuses it with Dodge passion and design, creating an agile, fun-to-drive compact car with mid-size levels of interior roominess and unmatched style, technology, safety and customization. The Dodge Dart brings features and content never before seen in the compact car segment. With a U.S. manufacturer’s suggested retail price (MSRP) of just $15,995 (excluding destination), the new Dodge Dart is a thoroughly modern vehicle that’s beautifully designed and crafted with high-quality materials, attention to detail and precision craftsmanship.

Learn more about the all-new Dart at http://www.Dodge.com or http://www.facebook.com/Dodge, or stop in to see us at Waldorf Dodge.  We are located on Route 301 North in Waldorf MD, just 15 minutes south of Washington DC.