Posted on November 4, 2010 by Administrator
Chrysler has announced that the electric version of the Fiat 500 will hit U.S. shores in 2012 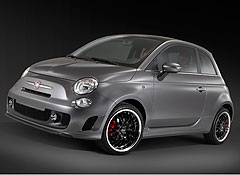 The 500 EV will be developed at the company’s headquarters in Michigan, and it will use a lithium-ion battery. Pricing will be announced closer to launch, but Chrysler says it will competitive with similar electric vehicles. When it arrives, the 500 EV will compete for early adopters with the Mitsubishi iMiev and Nissan Leaf electric cars.

The first vehicle from Chrysler and Fiat’s union, the gasoline-fueled version of the Fiat 500 is scheduled to debut at the end of 2010. Your sales staff at Waldorf Dodge will keep you informed as we start getting closer to these hitting the lot.

In other Chrysler news, the company has been chosen by the U.S. Department of Energy to receive a grant up to $48 million as part of the American Recovery and Reinvestment Act Vehicle Electrification program. Chrysler plans to build 140 electric Dodge Ram pickups for a three year test in real-world conditions.

The Ram PHEV powertrain will include a 5.7-liter HEMI V-8, hybrid transmission, and a lithium-ion battery. The vehicle will be able to go up to 20 miles using only electric power. Overall fuel economy is expected to improve more than 65 percent.

Dodge is not new to exploring the potential for a hybrid truck. Dodge had previously built a 2000 Ram Contractor hybrid and later a 2002 Ram 2500 HD diesel-hybrid pickup truck as demonstration vehicles for potential military and commercial applications. A Ram hybrid went into limited production in 2004. And hybrid versions of the HEMI-powered Dodge Durango and Chrysler Aspen SUVs were briefly sold in 2009. Chrysler had recent plans to sell a hybrid Ram, due to difficulty making a business case for the truck, development work was halted.